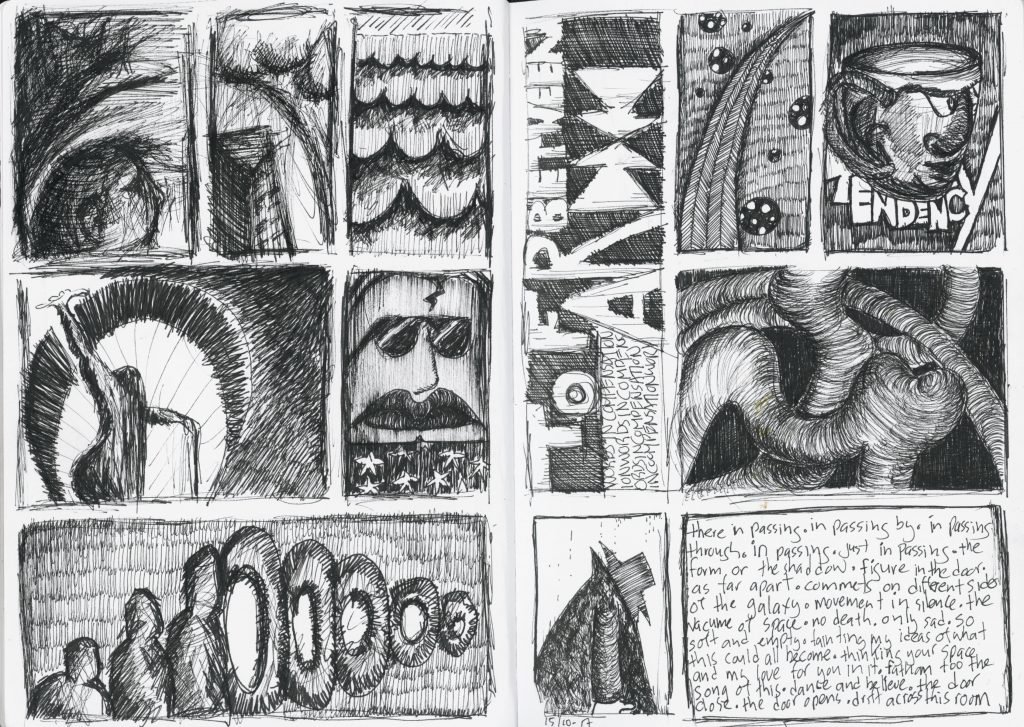 November weeks 2017: So dizmal damp weather soaks through the warmth of approaching Christmas.

Gee.. I slam the something hard on the table at midday. Smack , it says.
Up and coming we feel its proximity, its texture, its influence. The echoes of the neighborhood tell much of what it means.
Mrs. so and so showed it to us by opening the fridge and crying slowly into the coolness of something removed from the fear of this silly little piece of business.

The Friday 2017: tangents of repetition, entanglements, jokes to deaf ears, watchers from afar, colors on
my palate. All mashed into the realization that you too are human. And so what to do about this new knowledge of ones limitations.
As a child I had an idea.. which played with the thought of being an alien.
Shooting star crosses the night sky.
(Yes, ’twas an ideal summer on many of the planets scattered throughout the Crab nebular… just a lot of gas they told us at school… and i prayed desperately at nights while ignoring the hormonal splurge from within my body. Me being the girl in the story, catch on?
A plastic bag rustlelikescratch somewhere displacable or more intimate than one would assume. Pouts of liberation and tones of extrication more familiar than not… ah you sweet nubile tam tam, am i not the seed to be blessed with the gift of your sweet incubation? A pent up pocket of gunk and we could both be amused as i spin and spin upon this withering axis… so giveita stroke whydontya… the vacuum being his chamber, his mechanism, his technique and behold that brat had ears more sensitive than the latest model dish antenna and what’s more, he was on the make. No talk here of light speed travel in saucer craft or the like, no computerized special effects, more the endless strain of a complacent shadow falling or being sent out from the core of an artsy fartsy young rebel from the planet of Convolution… him being the alien in the story, catch on?)

Friday the 10th (Mortensaften) : these guys coming from east and west. Pitching in with their 5cents worth. All of them drank their mothers milk and dreamt of permanence.
Now they gaze so empty into the hazy shimmer of the years dead summer. Looks a lot like pain. Feels a lot like rain… and yet in the silence of this all I feel their hope. Yes it is hope.

The next Friday 2017: At the bottom of that sea (Aegean) there is a collection of my own skin cells… and other bits left behind. Fish will come to eat this too. Yes too.. I will return year after year. Stepping into this tiny opening just enough to prolong the existence of humanity. Or lesser still, justify so many personal failings.

Dive down into this and eat of the knowledge. Kill the demons and materialize intact on the home front. (holiday ended again)

island prompt guts new moon frame of sea night the peace i’ll have the far reach. i’ll have or grind and crunch the fast feet over loose stones and throw her into the water and from a distance she may allow me to take her…

out here the trip over and over and the distance reduced to a smile on awakening and her sight or the sight of her, perhaps food and they wrote stories and made myths about my approach and the bright light and spacey sounds announcing my arrival from distant galaxies were only chicken feed to her, that burning beauty of my dreams, my young and seedy dreams…
oh take note the shiny pearl a glow deep and deep…
not formed it have i, and not had any say in its presence have i…
the tiny lady so encompassing while roots those roots hold rocklike their strangle on the balls of our man for all seasons…
yes, a pearl she is and a face she craves and a chance to speak out she demands…

by Christ we’ll have to teach you a lesson one of these days my son..!